Post Tweet Pin It Email Print
Home / In The News / Who actually suffers from a boycott of Jerusalem?

Who actually suffers from a boycott of Jerusalem? 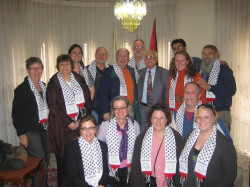 An American group meets with Victor Batarseh, mayor of Bethlehem.

Our own Aziz Abu Sarah writes an article for +972 about inviting Muslims to visit and support East Jerusalem.

Last week, the Grand Mufti of Egypt, Ali Gomaa, made an unprecedented visit to Jerusalem, where he worshiped at the famous Al Aqsa Mosque. His visit drew condemnation from Muslim leaders in Egypt, and even from some Palestinians. Muslim leaders across the Middle East have long followed a policy of boycotting travel to Jerusalem, until Israel ends its occupation of the city and Palestinian land. Some have labeled those who visit Jerusalem as “normalizers” of the occupation, and sometimes even traitors.