Legal Education in Israel and the West Bank 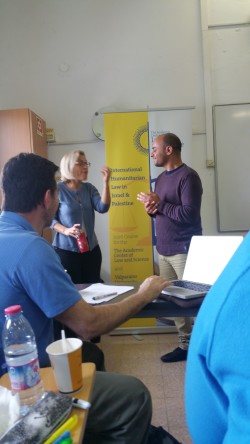 The day started early in the morning, with a quick breakfast and a departure from the hotel at 7am. The drive to Shaari Mishpat is a long one, compared to most drives we have in the small State of Israel. It is also a fascinating drive. The road we take goes through the West Bank, which provides a constant reminder of the separation of peoples in this ancient land. Additionally, the landscape along the route is stunning. The low mountains, scrub underbrush, and rocky hillsides are unlike anything I’ve seen before.

Upon arrival to the school, we went straight to the classroom, only pausing long enough for the group to stock up on coffee, as law students tend to do. This day was a day of learning. There were to be no guided tours, no touristy sites, nor any other stops. The goal was to have a day focused on legal education. Professor Ronen gave three lectures concerning documents such as the Oslo Accords, an overview of the law of occupation, and the application of the law of occupation to the West Bank. These topics were very interesting and certainly of the highest importance to our understanding of the conflict within the realm of international law. In addition to Professor Ronen’s lectures, we heard from Nitsana Darshan-Leitner from Shurat HaDin Israel Law Center. She explained how her law group uses the courts to fight terrorism in a unique fashion. Her organization attempts to use legal means to bankrupt terrorist groups. It is definitely a creative use of the legal system! After a long day of class, we were all happy to return to the hotel in Jerusalem, find dinner, and get some much-needed rest.