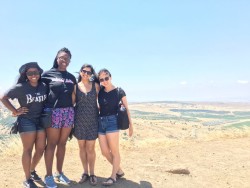 This blog post was brought to you by Jessie M…

Our first stop of the day was at the powerful Tel Hai memorial. This site is of vital importance to Zionists for multiple reasons. The story behind it is a tragedy defined by borders. In 1907 there was a small kibbutz in the area inhabited by Russian Jews, who shared in the idea of communal living, as well as multiple Bedouin tribes, Palestinian nomads. Originally this area was planned to be under British control but due to the lack of enforcement 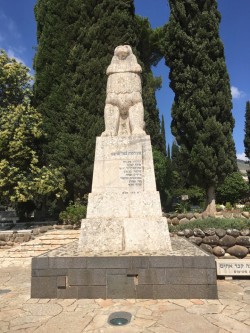 and strictness it ultimately fell under the control of the French. The Bedouins thought of both the French soldiers and Zionist settlers as enemies to be defeated. Years later in 1920 group of Bedouins entered the Kibbutz, deceiving the Jews by stating they were there to in search of French soldiers. Once the Bedouins had gotten far enough inside of the Kibbutz they began to open fire on the Jews. Even though the Jews fired back, eight members of the Kibbutz perished in the battle. Among them was Joseph Trumpeldor, a Zionist activist who assisted in bringing Jews into Palestine. Before he passed he stated, “It’s good to die for ones country”. This famous quote is written in Hebrew on the memorial statue. This statement still carries great meaning to the Jews and the Zionist cause. Although only a small number of people died, the impact of this battle started something monumental. It sparked a movement of heroic self-sacrifice for country, which is very much alive today. Reflecting upon what these heroic martyrs gave up for their country we all left the memorial pondering one question. What would we be willing to die for?

The next stop of the day was a quick look at the Lebanon border. 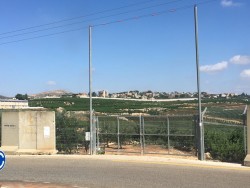 Although today was a beautiful, sunny, and peaceful day at the border, our tour guide reminded us that not too long ago this area was war zone. Since the last war in 2006 ended without an official peace agreement between Israel and Lebanon, the residents of this area are always on alert during times of increased tension. Currently, both countries are in a state of peace for two main reasons. Firstly, Lebanon is an active protagonist in the Syrian crisis, which is keeping their forces rather occupied. Secondly, the last war resulted in immense damage on both sides and since then the capacity to inflict damage has only grown. Should they engage with each other, it’s clear the damage would be insurmountable, like two people holding loaded pistols to each other’s head. Neither side is willing to pull the trigger.

From there we drove up to Mount Bental, an old Israeli outpost now used by the United Nations to monitor Syria. Driving up we passed numerous livestock and flocks of birds. Upon arriving we walked up as far 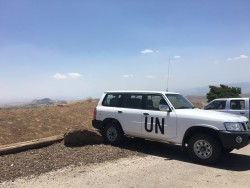 as we could to the lookout. Overlooking Israel, Lebanon, and Syria our tour guide discussed the meaningful history of behind this cite in the Yom Kippur War. After the Six Day War, in 1967, Israel seized this area, the Golan Heights, among other areas from Syria and Egypt. Before fighting broke out in 1973, King Hussein of Jordan secretly warned Prime Minister Golda Meir of the imminent attack. Unfortunately, the Prime Minister didn’t appropriately prepare the defense force. There are many reasons this failure can be 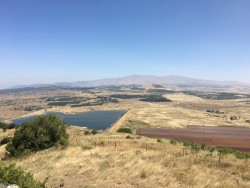 explained. One of the most widely accepted is that after the destruction of the Arab States in the Six Day War it was hard to believe Syria and Egypt would be willing to risk beginning another one. Their strategy was to fight a limited war in which the goal was to reclaim their land that they previously lost. While Syria did ultimately fail to regain their land, the Yom Kippur war was the second bloodiest war in Israeli history. While at Mount Bental we walked through old underground bunkers, getting a small sense of how these soldiers lived 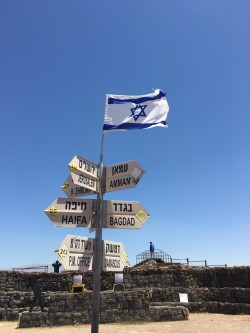 during the war. On our way down the mountain we passed multiple active military bases. This powerful presence shows the state’s dedication to protecting the Golan Heights and ensuring that the Israeli flag will always fly high on Mount Bental.

We ended the day back at the Hermon Field School with dinner and a bonfire. Lucky for us we have a few students who are skilled guitar players. It was a treat to relax, gather around the fire pit, listen to some guitar, and laugh together. 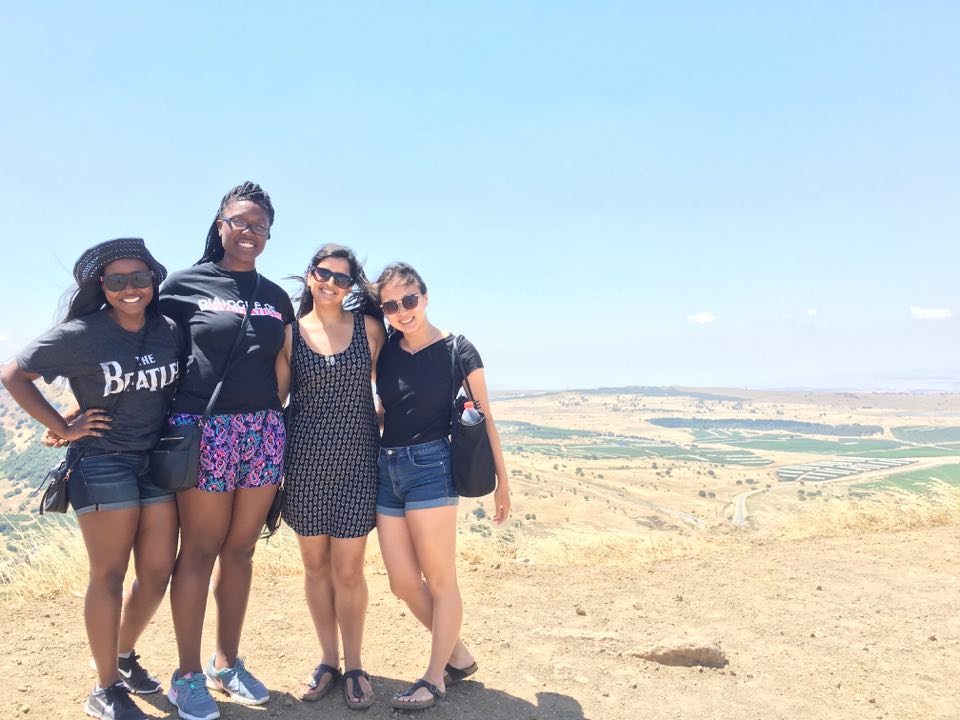