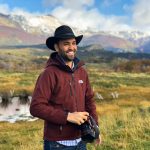 By our Co-Founder Aziz Abu Sarah

Experts say that travel will never be the same again after COVID-19. While I believe that COVID-19 will inspire some people to rethink their travel habits, we need more than just talking about adjusting our habits when we can travel again.

If we just theorize about “the day after,” no changes are likely to happen. Instead, we need to talk about how to start changing the travel industry right now. This transformation needs a change of heart and mind. For many of us, It feels like our world has shrunk as we are confined in our homes. So, before we talk about how to travel as a peacemaker physically, we should consider how are we traveling now from home.

Travel isn’t about distance; it’s about making a connection

Growing up in Jerusalem, a popular tour destination for visitors to the Holy Land, I was always fascinated by tourists. As a kid, I went to Al-Aqsa School in Jerusalem – named after the Al-Aqsa Mosque. I went to kindergarten and summer camps held in the mosque compound, and on the way to and from school I passed many tourists. Each time, I would excitedly say, “Hello!” and try to catch their attention. Some of them would approach me, wait for my smile to widen, and then snap a photo. I would excitedly pose for them; I initially loved the attention.

Soon after they snapped the photo, however, their tour guide would typically intervene and tell them to keep moving. Even when they were alone, they would usually snap the photo, say thank you, and then move on. I hated that. I felt objectified. I wanted to speak to them, although I didn’t have the English to hold a conversation. Still, they could have spent an extra minute or two speaking with me. But they had plans and places to go, more sites to see, and more people and places to take photos of.

This experience is what moved me to fight for a different kind of travel industry, where people are at the most important part of our journeys. When I co-founded MEJDI Tours, we wanted to give a platform to ignored and unknown stories. We wanted to go beyond the usual landmarks and major sites, and focus on creating a lasting connection between our travelers and local communities. In his poem Tourist, Yehdua Amichai explained what tourism should be like:

“Once I sat on the steps by a gate at David’s Tower,
I placed my two heavy baskets at my side.
A group of tourists were standing around their guide and I became their target marker.
‘You see that man with the baskets?
Just right of his head, there’s an arch from the Roman period.
Just right of his head.’
‘But he’s moving, he’s moving!’
I said to myself: redemption will only come if their guide tells them,
‘You see that arch from the Roman period? It’s not important:
but next to it, left and down a bit,
there sits a man who’s bought fruit and vegetables for his family.’”

This poem is an inspiration to me, because Amichai outlines what will bring redemption to the travel industry. He describes the heart of travel to be about the stories of the people who live where we travel. The story of the man who works hard to buy fruit and vegetables for his family. The story of the person that has no voice in the public narrative of a country. It’s that voice that needs to be amplified by the travel industry and should be heard by every traveler.

We can start practicing that kind of travel right now. We can learn about other cultures, peoples and stories using technology. We can attend online seminars, listen to livestreams and podcasts, and connect with people who live thousands of miles away. We can listen to people’s stories by reading autobiographies, listening to interviews, and watching documentaries.

If we get into these habits at home, and learn to listen to other people voices, especially those we that aren’t usually on our radar, we will be more likely to travel differently when physical travel is possible again. The first decision we made at MEJDI Tours upon the shutdown was starting a livestream to connect our travelers with storytellers from all over the world.

Travel should be about overcoming preconceptions

As we encounter those who are different than us, we learn to face our stereotypes and about other communities. About 12 years ago, I was invited to speak on a panel with Nobel Peace laureate Betty Williams, who told me a story about how she had battled stereotypes in Northern Ireland.

Williams described how much the conflict in Northern Ireland is intertwined with identity and everyday life. Catholic and Protestant children often don’t understand that the world is bigger than their conflict.

As a result, Williams worked to bring Catholic and Protestant children together, in order to break down social barriers between the two communities for future generations. To widen the worldview of the children, one day she brought in a Buddhist monk to give a talk for the children. The monk explained the teachings of Buddhism. The children loved it and ate it up. At the end of the lecture, their hands shot into the air with questions for the Buddhist man.

But humorously, one of the first children Williams called on had an unusual question. In an innocently puzzled voice, he asked, “This is so different; this is amazing! But I still don’t understand one thing: are Buddhist monks Catholic or Protestant?”

The children believed that the Catholic-Protestant divide in Ireland shaped the whole world. My first reaction was to laugh when Williams told me the story, but I realized that many of us are no different than those kids. We divide the world into us versus them – those who look like us, have the same cultural background as us, speak our language, and practice the same religion or beliefs, versus those who are different. And many times, we only discover our own prejudices and stereotypes when we’re directly faced with them. This is why travel – or inviting others who travel to share their stories – can be a powerful tool for breaking down these assumptions.

In some places, COVID-19 has brought people together, but in many other regions in the world, it exacerbated divides. Like the story above, many people have started to view the world in terms of us versus them. Many of my American-Asian friends in the United States have shared stories of discriminatory attacks on them and on their families. Random people yell at them and accuse them of bringing the coronavirus into the United States. Our political divide of “left and right” is getting worse by the day, and the class divide is more visible than ever.

Sometimes, the most challenging travel is not the furthest way, but rather it’s crossing the street. It’s in these times of extreme polarization that we need extreme compassion. We must reach out to the vulnerable in your community. Ask people how they are doing, and what they are going through. We can donate, volunteer, connect and learn what the needs are in our community.

Travel provides an opportunity to learn about each other and understand one another, which leads to our empathizing with each other. However, we will not care about those living thousands of miles away, if we don’t connect with those who live in our own neighborhoods, cities and country.

Travel is an essential peacemaking strategy

In the end, travel can be a remedy for the biggest threats facing humanity today. In an interview with the British newspaper the Independent, Stephen Hawking outlined the biggest threat to humanity, and it was not what most would have expected. It wasn’t an asteroid hitting the Earth that worried Hawking. It wasn’t even the environmental crisis that we’re facing. Instead, it was human aggression.

“The human failing I would most like to correct is aggression,” he said. “It may have had survival advantage in caveman days, to get more food, territory, or a partner with whom to reproduce, but now it threatens to destroy us all.”

According to the Independent, Hawking especially wanted humans to focus on empathy to safeguard our future.

Hawking understood that major threats to humanity can be dealt with if we learn to work together; none of the other important issues will be solved if we continue fighting and killing each other. That’s why its so important to transform how we travel, and to START NOW.

Hawking’s message is particularly important amid growing nationalism around the world, in which individuals are told to always put their own interests and their country’s interests first. We are told that we are in the midst of a global crisis, in which there will be winners and losers – and our country must win.

But we all live on this earth together, and what happens in China will affect people living thousands of miles away in Uruguay. Similarly, what happens in the United States impacts the lives of billions of people around the world. We don’t live on islands isolated from the rest of the world’s political problems, climate policies, economic situations, and threats. Perhaps nothing has proved the interconnectivity of our world like the spread of COVID-19.  The issues facing human society do not recognize the artificial boundaries and borders we’ve created. We are all connected.

We must understand the privilege of travel, and therefore the responsibility we have in bringing down barriers and building bridges between our peoples. If we accept Hawking’s claim that human aggression is a major threat to human existence, then I don’t know a better medium than connecting with others to promote understanding and coexistence. We, the travelers, have the power to better this world, whether we are traveling in a different country or right at home.

Aziz Abu Sarah is a National Geographic Explorer, a TED Fellow and cofounder of MEJDI Tours. His work has been featured by BBC, NPR, CNN, the Washington Post, and Al Jazeera, among others. He is the recipient of many awards, including the Goldberg Prize for Peace in the Middle East from the Institute of International Education.