This blog post is brought to you by Laura B…

We started the day with a bus ride up to the Supreme Court. Walking in, the first thing you see is a long staircase and a large window. Not only was the building beautifully created, it is also filled with symbolism. The building incorporates the old and the new, representing the characteristics of the state. Furthermore, the wall on the right was constructed to look similar to the Western Wall which is meant to depict the relationship between state and religion. Also, on the floor next to the “Western Wall” was a mirror encompassing the Wall. This was meant to give the illusion that the wall continues endlessly to show that religion is part of the roots of Israeli identity. The other wall is made of smooth concrete made to represent the new Israel compared to the old Israel depicted by the Old City stone. 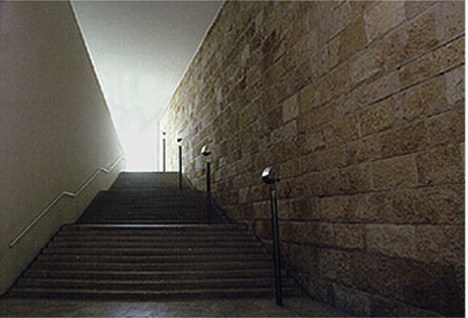 The staircase is also split into three sections, each containing ten steps. This is meant to represent the thirty first degrees of Freemasonry. From the bottom of the stairs all that can be seen is the bright blue sky which depicts the idea that justice comes from above. As you go up the stairs you leave the darkness and go into the light which symbolizes wisdom and illumination. Once up the stairs, the hallway narrows into a dome surrounded by law books from the Supreme Court library. But at a second look the dome is really a pyramid, which was inspired by the Tomb of Zechariah and Tomb of Absalom in the Kidron Valley in Jerusalem. This area serves at the “gate house” before entering the courtrooms. The library is divided into three levels, representing the last three degrees of Freemasonry. The first level is open to the public, the second level is reserved for judges, and third level can only be accessed by retired judges. Then we walked into one of the courtrooms. The entrance to the courtrooms resemble Jewish tombs and the holes above the doorways are meant to permit the soul to leave the room. In the courtrooms, the judges are illuminated by natural light. The natural light is meant to represent the divine light shining on the judges who are listening to the pleas of the masses. 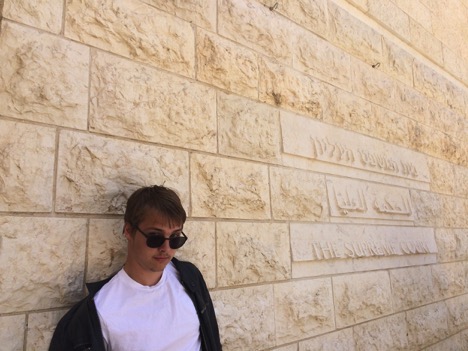 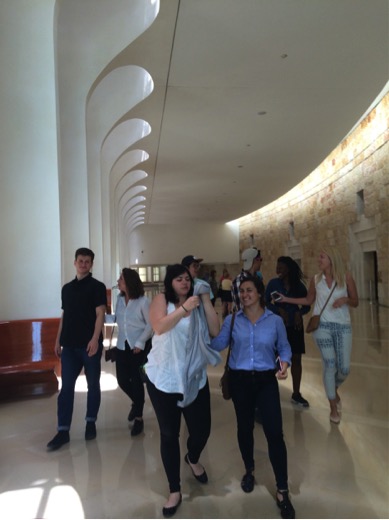 Once the lovely tour of the Supreme Court was over, we headed over to the German colony in West Jerusalem for lunch. The streets were shaded by the large trees which made it nice to walk around the area. I sat down at a quaint restaurant with a couple of friends. We decided to take a break from shawarma and hummus and went for a classic pizza. 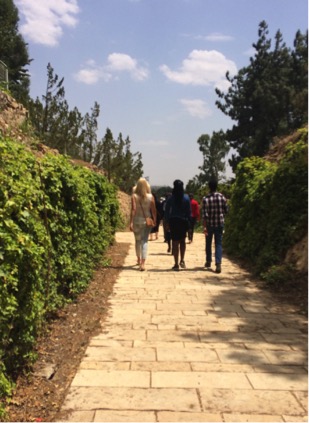 After lunch we took the bus to Pardes Centre for Judaism and Conflict Resolution to speak with Rabbi Doctor Daniel Roth. Rabbi Roth teaches about religion and conflict resolution which he does by analysing literature. Rabbi Roth believes this is an essential component to understanding the ‘other’. He does so by teaching the ambiguity of religious literature to get people to see varying perspectives through an analytical lens. An example of this tactic can be seen below which looks at the ambiguity of the Golden Rule amongst religions.

The Love of Brother and/or Others: The Ambiguity of the Greatest Golden Rule in the Torah

Love you neighbor as yourself, I am the Lord.

“Love your neighbor as yourself” (Leviticus 19) –

Rabbi Akiva (second century CE) taught: “ This is the most important rule in the Torah.”

To love one’s fellow [person] as it is written, “And you shall love your neighbor as yourself” (Lev. 19:18). And included in this is bringing peace between a person and his fellow, and judging him favorably…And Kind David wrote in his book, “Seek peace and pursue it” (Ps. 34:15).

It is a positive commandment of Rabbinic origin to visit the sick, comfort mourners…These are deeds of kindness that one carries out with his person that have no limit. Although all these mitzbot are of Rabbinic origin, they are included in the Scriptural commandment Leviticus 19:18: “Love you neighbor as yourself.” That charge implies that whatever you would like other people to do for you, you should do for you comrade in the Torah and mitzvoth (commandments).

Question: Do the commandments “Love your neighbor as yourself” and “don’t hate your brother in your heart”, said also in regards to a soldier and to a policeman that comes to expel a person of Israel from his home? For there were rabbis who expressed the opinion in the past that there is an obligation to lobe and respect a soldier and policeman simply for who they are.

Response: These commandments are indeed “the greatest rule of the Torah”as the great scholars of Israel have expanded upon this, such as Hillel and after him Rabbi Akiva…However, this commandment only applies within certain conditions of Halachah (jewish law). It does not apply when a person of Israel raises a hand against the Torah of Moses and against a person keep the commandments. It is already written by the Safes, and brought in the words of the Rambam that this commandment was only said in regards to “your brother in Torah and commandments.” From here (we learn) that a soldier and policeman that comes to force a Jew to transgress a commandment and to rob and crush and destroy his home and to transfer the place to the hands of the enemy, he is a “wicked person”, and hated by G-d, and is no longer in the category of “love your neighbor as yourself.”

The essence of loving one’s neighbor is for a person to love all humanity regardless of what nation they are from, or language simply because they are a human being (created) in G-d’s image and likeness like you. And you shall love your neighbor as yourself (Leviticus 19), and the intention is not specifically a fellow Israelite, for if that was the case it should have been written “love your brother as yourself” … rather the intention of “neighbor” is to any human being like yourself who is engaged in matters of the world like you, meaning every nation.

I don’t solve problems, but I try to improve the basis upon which issues may be settled. I’m not a political person nor am I a subcontractor of politicians. I have pure religious interests in learning together with Muslims. This is the whole secret of religion – to meet the other side. “love your neighbor” is the key to religion.

“Love your neighbor as yourself” (Leviticus 19) –

Rabbi Akiva (second century CE) taught: “This is the most important rule in the Torah.”

Ben Azzai says: “This is the book of chronologies of Adam. In the day that God created man, in the likeness of God made He him”, (Genesis, 5:1-2), and this rule is greater than that (of Rabbi Akiva’s).”

With this in mind, Rabbi Roth believes religion is not the problem but rather the way it is interpreted and acted upon constitutes the issue. I believe the work being done in the Pardes Center is important and an interesting approach to mending the relationship between Israelis and Palestinians, especially the more religious of the communities.