A Better Tour Company for the World

MEJDI Tours was founded on the belief that tourism should be a vehicle for a more positive and interconnected world. Mejdi -which translates to both “honor” and “respect”- was established to achieve one goal: change the face of tourism through a socially responsible business model that honors both clients and communities.

“When you choose MEJDI, you’re choosing to see more than sites, you’re choosing to tap into one of the world’s best kept secrets: that we are all connected by shared values that cross cultures, languages, religions, nationalities, and ethnicities-and that there is far more that unites us than separates us.” – Scott Cooper, MEJDI co-owner

MEJDI makes a significant effort to support local and mission aligned suppliers in the execution of tours. As a certified B Corp since 2013, we continuously strive to meet rigorous standards of social and environmental performance, accountability, and transparency. Of particular note is MEJDI’s B Corp score on Community and Workers which significantly outperforms the average.

Connecting the World Through Travel

When you choose MEJDI, you’re choosing to see more than sites, you’re choosing to tap into one of the world’s best kept secrets: that we are all connected by shared values that cross cultures, languages, religions, nationalities, and ethnicities-and that there is far more that unites us than separates us.

A Values-Based Approach to Tourism

As a certified B Corp, which harnesses the power of business for social change, MEJDI rejects the model of traditional consumer tourism-a highly commercialized experience that supports big business and often damages local communities-instead employing a new model of tourism based on clients, communities, and financial and environmental sustainability. MEJDI Tours is dedicated to opening hearts and expanding minds, inviting clients to become cultural explorers while engaging and supporting the global communities we serve.

MEJDI organizes the building blocks of creating positive social change. The objective of which is to connect networks within and across other networks. 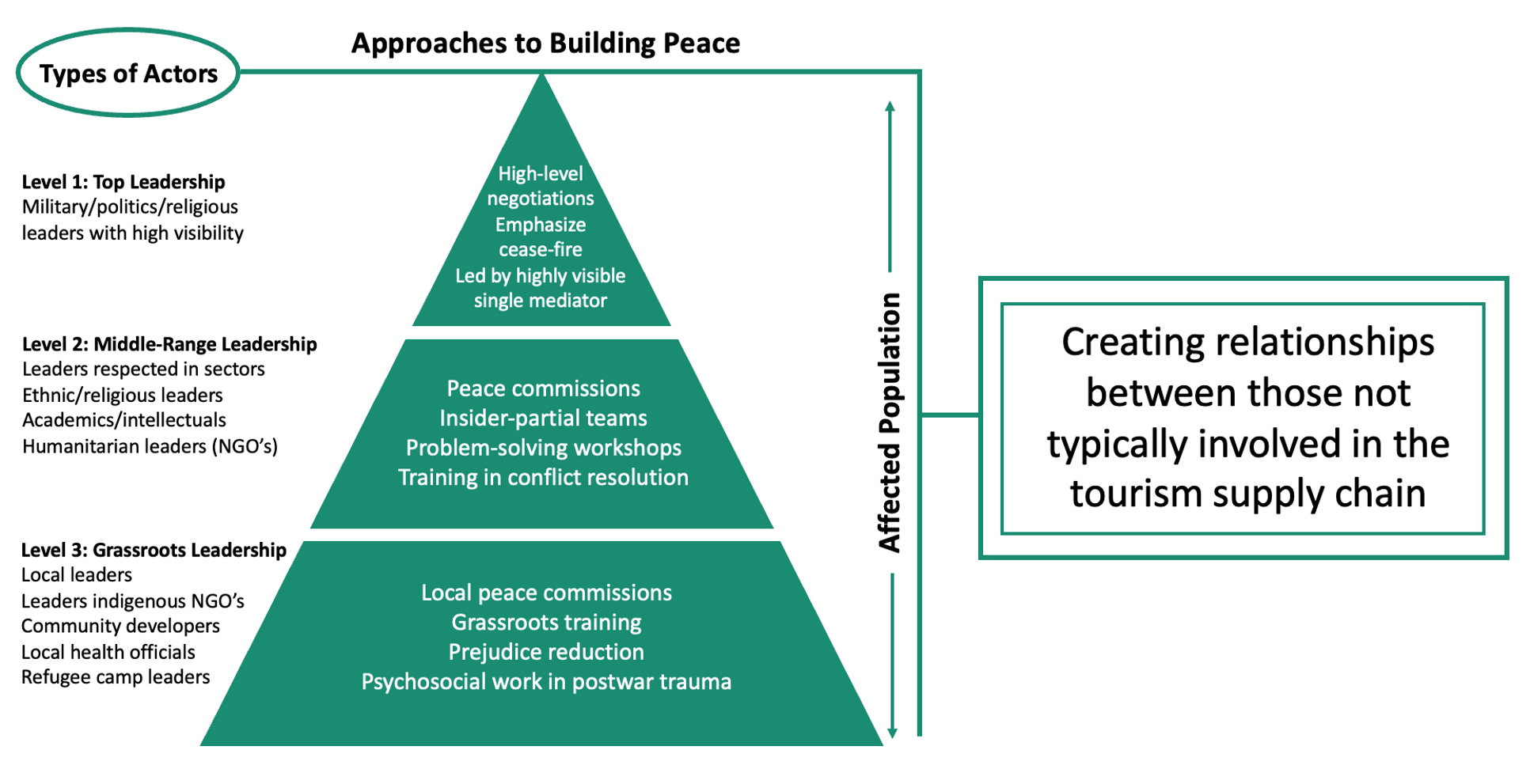 “Most tours that focus on social divisions simply reinforce participants’ existing believes. MEJDI’s multi-narrative structure challenges this barrier to using tourism to spark attitude and change, in that it reaches a broad audience and facilitates attitude change through building complexity and greater compassion.

MEJDI’s client base is ideologically, religiously, and politically diverse, including colleges/universities, US-based peace groups, synagogues, and church groups from all ends of the political spectrum.

MEJDI’s ability to reach such a wide variety of participants and to facilitate unique experiences that result in deeper compassion, understanding and engagement across the board, demonstrates its effectiveness in changing perceptions and motivating its participants to act…” 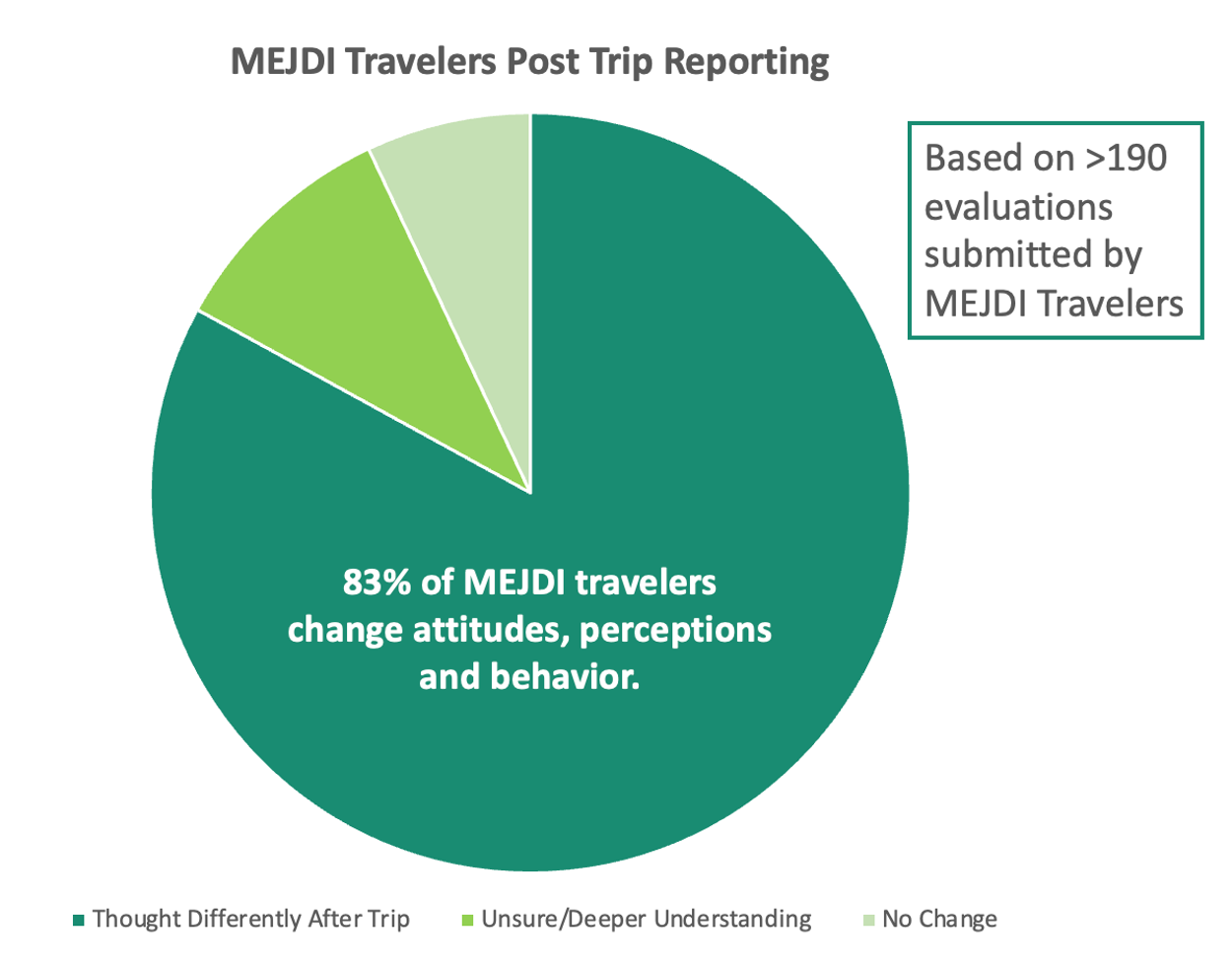 MEJDI has received and been nominated for many awards and recognitions:

1. Intercultural Innovation Award from United Nations Alliance of Civilizations and the BMW Group

Touring for Peace: The Role of Dual-Narrative Tours in Creating Transnational Activists

Findings: The findings of this study suggest that while these tours tend to engender increased support for Palestinians over Israelis, their most salient function appears to be the cultivation of empathy for “both sides” of the conflict. Similarly, dual-narrative tours often prompt visitors to understand the conflict to be more complex than they previously thought. In terms of activism, tourists tend to prioritize education-based initiatives in their plans for post-tour political engagement. In addition, a large number of participants articulated commitments to support joint Israeli-Palestinian non-governmental organizations and to try to influence US foreign policy to be more equitable. Originality/value: These findings complicate debates within the scholarship on peacebuilding as well as within movements for social justice in Israel/Palestine. While programs that equate Israeli and Palestinian perspectives are often criticized for reinforcing the status quo, dual-narrative tours appear to facilitate nuance and universalism while also shifting tourists toward greater identification with an oppressed population. Together, these findings shed light on the ability of tourism to facilitate positive attitude change about a previously stigmatized racial/ethnic group, as well as the power of contact and exposure to marginalized narratives to inspire peace and justice activism.

Summary: Looking at the distilled essence of this experience it can be said that it is in line with the mission of the company. The social interaction during this trip created a personal connection between the participants and the locals as well as the area (see chapter 5.1.1.1). Staying in host families and getting to experience their daily life was found to be very meaningful for the participants. They highly appreciated this unique opportunity as it made the conflict become a reality instead of just a fictional story from a book or the news. Creating this kind of connection is one of the main goals of MEJDI as described on their website (MEJDI Tours, 2017a). Furthermore, this trip achieved the aim of “expanding [the] minds” (MEJDI Page 43 Tours, 2017a) of the tourists. They did not only learn about the various narratives that are present in Israel/Palestine, but were also able to reflect upon their own actions and biases (see chapter 5.1.2.2; Turner & Ash, 1975).

One of the founders described MEJDI’s ability to highlight the interconnectedness in the world as one major advantage of the company: “When you choose MEJDI, you’re choosing to see more than sites, you’re choosing to tap into one of the world’s best kept secrets: that we are all connected by shared values that cross cultures, languages, religions, nationalities, and ethnicities-and that there is far more that unites us than separates us.” (Cooper, n.d.)