This blog entry was brought to you by Juanita B…

Many of us had been awaiting today’s trip because we had the opportunity to go to the Dead Sea! However, before we had the pleasure of covering ourselves in mud, we had plenty of other activities ahead of us. The first thing that our Israeli tour guide, Nathan, said to us today was, “Today, I will not speak about politics or the conflict…” and before he could finish his sentence the tour bus was filled with applause. Don’t get me wrong, we all know that our trip encounters many political discussions on the Israeli-Palestinian conflict. However, it was nice to join the mainstream of tourists for the day.

We began the day by driving to Masada, the place where King Herod established palaces for himself and his people, which was later sieged by the Roman Empire who declared that all people from Masada would commit mass suicide rather than being killed by the Romans. The reason we know all this is not because I went back in time to witness it all, but because two people survived to tell the story. Seeing so many ruins still in place left me in awe. In one of the ruins we saw, there were mosaics still in place from the floor of a bath house, which incidentally was also the place well all the gossip was held.

After touring amongst the ruins, some us of made the bold (and maybe wrong) choice of hiking down Masada! I had previously thought that hiking down would not be hard at all, but I proved to be extremely wrong since I was the last one to make it back to the bottom. Even though it was a hard trek, we all survived and it was completely worth it because we got to see the whole view of the Dead Sea and the dessert. 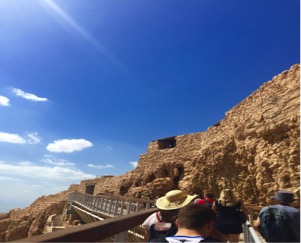 After having a delicious lunch of Shawarma, we headed over to meet with one of the members from Eco Peace. Eco Peace involves three countries; Israel, Palestine, and Jordan. They have started an environmental initiative grounded on the belief that if we all share the land it doesn’t matter what boundaries exist, we are all responsible for the well being of our ecosystem. This was such a refreshing point of view to hear. One of the main points that she touched upon was the scarcity of water in Israel and how much it could be diminished by these countries coming together to put effort into water saving and sharing strategies. This talk was very inspiring as it highlighted that many times, we forget what is most essential to our existence. In this case, our environment.

While leaving the eco place I was so excited to head over to the Dead Sea. Once we got there I realized that there were so many tourists who had – voluntarily- covered themselves in mud. I was a bit apprehensive about going in at first, but I am so happy I made the decision to go in. I had never expected to be able to float so easily in the water and it was such a nice way to relax with everyone as we lay on our backs enjoying the afternoon. We could not believe how soft our skin was after just a few minutes of being in the sea. It was definitely the perfect way to end the day. 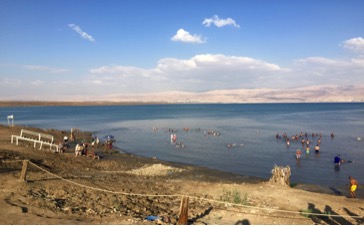