This post was brought to you by Abbey V from the Josef Korbel School of International Studies/St. Norbert College trip to Israel and Palestine…

I landed in Tel Aviv surrounded by about 18 other graduate students, my human rights professor, and students/faculty from St. Norbert College. To prepare for the trip, I completed 3 relevant courses: Introduction to Human Rights, A Prospectus Israel/Palestine, and Workshop and Human Rights and the Middle East, to ready myself for a 15-day tour with a multi-narrative-focused company called Mejdi Tours. Despite all my preparation for the trip, I arrived with few expectations and many questions. After a meal of hummus and pickled vegetables, we settled in at our hotel in Jerusalem, where we would spend the next three days…

My time in Jerusalem was characterized by polarized viewpoints. On our first full day, we visited the holiest site in Judaism, and third holiest site in Islam: Temple Mount/Haram Al-Sharif. Sheik Yusef, an important Islamic leader, spoke to us and denied all Jewish history at Temple Mount, claiming that the site had always, and would always, belong only to Muslims. Later on in the trip, we also heard from a retired spokeswoman for the Israeli government, Miri Eisin, who claimed that “Zionism is not about the Palestinians” and theorized: “The more sovereign Palestine is, the less secure I am [as an Israeli Jew].”

Symbolic of the tension in the perspectives we were hearing, while at Shabaat dinner with a local Jewish family, there was a terrorist attack outside of Damascus Gate, where two Palestinians stabbed a 23-year-old member of the IDF. The apparent normality of sharing dinner with a small, picturesque Jewish family was re-contextualized within the broader struggles of the region, making our quiet evening seem like a kind-of charade. The State of Israel’s “annexation” of East Jerusalem after the War of 1967 has 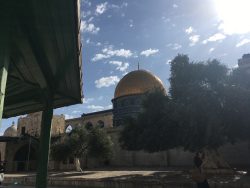 been declared illegal by the international community; yet, Israel remains determined to claim ownership of all of Jerusalem. This situation, along with myriad other factors, keeps the walled city on a precipice of violence. My experience with the speakers we heard in our first few days, along with the attack on the night of Shabbat, left me feeling like, just as justice is a prerequisite for peace, perhaps it, too, is a prerequisite for genuine holiness; if a space is marred by conflict and violence, perhaps basking too much in its holiness without first working for peace is a bit like worshipping a golden calf. Though we visited many holy sites for the world’s largest religious traditions, I found myself mourning our lack of community as a human species, rather than feeling like I was touching brick and mortar infused with divinity.

A hopeful perspective we heard in Jerusalem came from Dr. Daniel Roth, who seeks to teach conflict resolution through interpretation of sacred texts. He claims that these texts provide a “safe playground” for entrenched readers to stretch their narrative muscles, learning to accept that texts can be interpreted multiple, legitimate ways. These exercises help participants in his workshops extrapolate this concept, to understand that narrative, history, and culture can, therefore, also be interpreted in multiple, legitimate ways. We finished our time in Jerusalem by dancing, singing, and eating at a traditional Iftaar meal, to music played by an inter-cultural band.

As we passed through a checkpoint in the Separation Wall dividing Israel from The West Bank (WB) into Bethlehem, the realization that my ability to cross these borders more easily than indigenous people who had been living on these lands for centuries came washing over me. Entering in all my privilege, I took a moment to open my ears wider, sink into a posture of kinship, and prepare myself to humbly listen to the narratives around me. Then, I stepped off the bus and walked along the Wall. I took in images of resistance, heartache, solidarity, hatred — we read messages in Arabic, Hebrew, Spanish, English, German, Farsi…some funny, some angry, some beautiful, some ugly- painted on the most divisive canvas I’ve ever seen. 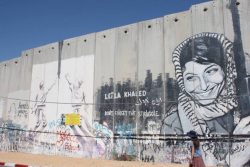 After overcoming the shock of the Wall, our group soon made its way to Aida Refugee Camp, composed of Palestinian families forcibly removed from their homes during Al Nakba (The Catastrophe)/Israel’s War of Independence. Our Israeli guide argued that the camp occupants “weren’t really refugees,” because they had been living in the camp since 1948. He believed that an emphasis on “refugee status” kept exiled Palestinians from “moving on” past 1948. Just when my soul needed it, we had the privilege of speaking with the Director of Alrowwad Cultural Center, Fattah, who works with Palestinian youth to encourage “beautiful resistance,” rather than violent (especially suicidal) means of fighting the occupation. Fattah invests in, and encourages Palestinian youth to utilize, artistic expressions of resistance – poetry, community-building, theater, and the written word. The Alrowwad Center reminded me of Centro Arte para la Paz in El Salvador – focused on peace within, for peace without. Fattah’s vision moved and grounded me, and his success stories again provided evidence of the kinds of conflict resolution that can be genuinely impactful.

The Salty waters of the Dead Sea, effortless floating, and beer at the lowest bar in the world…

rejuvenated our group nicely for our journey to Nazareth and Tiberias. This leg of the trip, we stayed at a lovely, condo-style homestead right beside the Sea of Galilee. For the two days we were there, we spent evenings watching the sun go down, 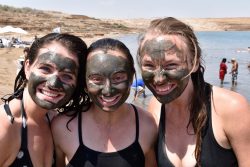 journaling, and night swimming, enjoying views of rolling hills and the Jaffa skyline, visible above the waves. Of course, in the midst of R&R, we made time to meet with Palestine’s Assistant Minister of Foreign Affairs for Europe, who discussed the difficulties of working for a struggling state, and sought to justify PA policies toward Palestinians in Gaza (i.e. cutting electricity).

Refreshed and motivated from all we had learned so far, we traveled to the Golan Heights to meet with the oft-overlooked Druze community there, who still consider themselves Syrian, though the hills are currently occupied by Israel. The Druze patriarch with whom we met, when asked about the conflict, said: “We don’t have the luxury of worrying about that;”currently, Israel takes excellent care of the Druze in Golan Heights, and to criticize the state could lead to them losing these benefits. I found this statement incredibly sharp. Though many in the community have family in Syria whom they cannot see, they do not resist Israel’s claim to the land. The Druze attitude again supports the idea that a little bit of economic development may be a more effective method of pacifying resistance to the state than any militarized response. The Golan Heights overlook Syria; during our visit we saw smoke rising from the Syrian Civil War, and heard mortar shells that sounded like thunder. Our guide shrugged his shoulders at our alarm, and explained that this was daily life, and that what we were hearing was mild compared to most days, bringing the conflict in Syria into a kind of relief that only becomes possible through encounter.

The last few days of our trip, I really noticed not having to wear long skirts and long-sleeved shirts, with our shift to more secular cities. The women in our group weren’t being told to cover-up as we visited different sites, and interactions became more relaxed. We also visited an entirely socialized, secular, old-fashioned kibbutz called Ramat Yohanan, and heard about the transition that most kibbutzim (the plural– who knew?!) have had to make to capitalist practices, because of their incompatibility with the capitalist economy of Israel and a globalized market.

The beautiful Baha’i (another religious minority in Israel) Gardens bid us “goodbye” as we left the stunning city of Haifa, and 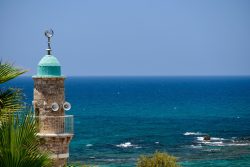 our final formalized delegation meeting happened at a bilingual school (Arabic and Hebrew/Jewish and Arab children taught together) called Orchard of Abraham’s Children in Jaffa, where we heard from a visionary teacher named Ihab. She explained the ways bilingual education builds bridges between Israeli and Arab families who are seeking to inspire the next generation to work for peace. She summarized the peacebuilding process beautifully by saying:

[With] this school, we have planted a seed in the middle of Jaffa…this measure is small; it’s not shouting. It’s calm. But, in our hearts, it’s big. It’s big. I’m sure.”

With that, we enjoyed one more sunset in Tel Aviv – dancing the night away, getting stung by some jellyfish in the Mediterranean, and meeting local Palestinian Israelis and Jewish Israelis, before hopping on a plane back to Denver.

Concretely, I’ll be doing one-on-one Arabic tutoring next quarter, and I will carry on studying the history of Israel-Palestine. I hope to continue exploring the possibilities for small-scale peacebuilding processes based on environmental sustainability and gender equality to build networks of resistance, healing, and policymaking. I’ll also be eating more hummus, and now have some friends and a host family in the Mid East to chat with via Skype and WhatsApp! Additionally, I’ve connected with some of the organizations I liked most, to see how I can help remotely.

More abstractly, I sincerely believe that the walls that stand to divide Palestine from Israel mirror the walls that have been built to blind us from our common ancestries and the beauty of sharing sacred spaces. The further we get from one another psychologically and emotionally, the more difficult it is going to be to get rid of these barriers. The Israel-Palestine conflict is not centuries-old; this historical misrepresentation distracts us from recognizing the geopolitical and economic interests that are served by walls and conflicts and a divided citizenry. Despite these painful realities, Jerusalem, especially, stands as a reminder: unity and disunity are on the same block; they live a breath, and a choice, away. This conflict provides a concentrated example of the world that is inevitably created by systems that prioritize homogeneity, zero-sum games, isolation, peace treaties over a strong civil society, and mutually exclusive narratives. However, so, too, does Jerusalem provide a concentrated example of our common roots; it is a tangible reminder of how much myth and history we share. I’m so thankful to have had the opportunity to go on this trip, and to get to know some of the projects that are working to foster peace.

Thank you all for the financial and emotional support, and for educating and inspiring me as mentors and peacemakers in your own communities. Shalom/Salaam/Peace 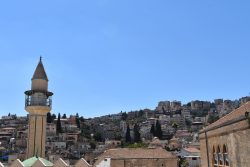 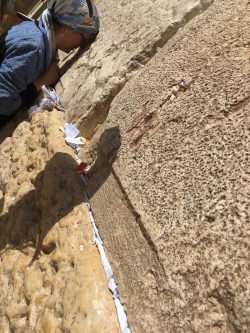 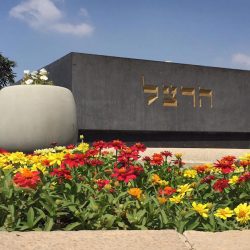 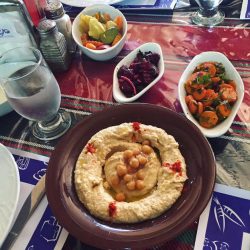 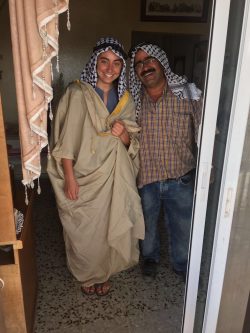 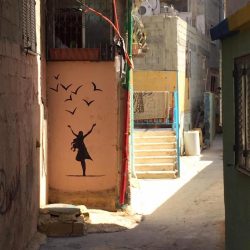