This post was brought to you by Carol H… 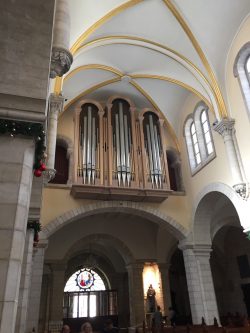 arted the day by driving into one of the Jewish settlements in and around Bethlehem. There we met with Bob who believes strongly that by doing the settlements that the Israeli’s are helping to bring about peace.

Then we traveled into Bethlehem. Again 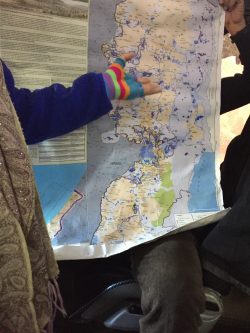 we were behind the security wall. There we entered the Church of the Nativity and saw the place St. Helena believed was the birthplace of Jesus. They are restoring the tiles along the tops of the walls and from what we could see they are going to be truly amazing. We also saw the original tiles underneath the church. Next door is a Franciscan church. We got to hear the organ while we were there. We also saw a huge marble baptismal font which had a pipe leading out the back for drainage.

We walked through the streets to the Diyar Consortium where we got to hear Dr. Mitzi Raheb speak. Through the use of maps he showed us how slowly but surelyIsrael is hemming in Bethlehem with settlements and more walls. There are 19 settlements to the north and south west-there is located the most fruitful land. They had three near the Dead Sea where they mine minerals which is against the Geneva Convention. When all is said and done he says there will be only 8 square miles left. He also told us that Christian’s are indigenous to Palesitine, they have been a presence since 2000 years ago. That they have had almost continuous occupation even as the many nations came and conquered and left and others took over. He told us that the Holy land needs bridges not walls. He believes that there is hope and Diyar Consortiums purpose is to try to bring it to the next generations. They’re goal is to create room for new hope. 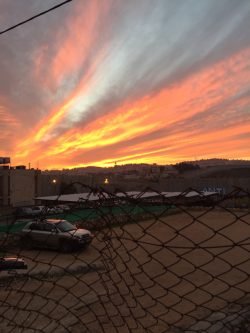 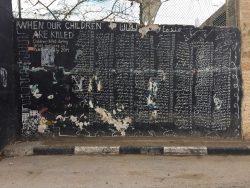 nd saw a memorial to one young boy who was killed by a sniper there on the street where we stood. We walked down to meet with the EAPPI representative Paul from Great Britain. The WCC (World Council of Churches) was asked to design something by the churches in Jerusalem which would provide a witness to the actions happening in the occupied territories. We saw a beautiful sunset while we were behind the wall.

Then we had to go through the checkpoint to leave Bethlehem.

We ended the day by listening to an Israeli and a Palestinian who unfortunately have lost loved ones in this violence. They talked about how both sides are paying the price for the lack of peace. They do some really amazing work. They brought many of us to tears. Check out their work at: http://www.theparentscircle.com/