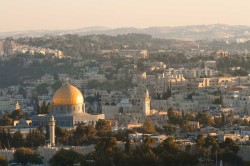 Aziz, with fellow MEJDI staff member Talia Salem, contribute to Common Ground News Service to weigh in on the philosophy behind MEJDI tours, and the extraordinary impact these tours have on all involved.

Jerusalem – Shira Nesher, an Israeli, stands alongside Fakhira Halloun, a Palestinian, as Nesher tells her story about life in a conflict zone to a group of American university students who are hanging onto her every word. “My family members are Holocaust survivors, and as an Israeli I grew up in an environment of fear and conflict. When I was 18, I enlisted in the Israeli Defense Forces, where I eventually became a military tour guide and an educator…”