Greetings from the Holy Land.

This post was brought to you by Heather P…

How does one summarize such days as these and the lessons we can only try to hold?   We toured The Old City of Jerusalem, stood in quiet awe at the Dome of the Rock, placed prayers at the Wailing Wall, and descended into The Church of the Holy Sepulcher…. and that was only the first day.  The next day, we met a gracious and brave Holocaust survivor who described herself as the daughter of 4 mothers.  Four different women mothered her during her childhood during World War II, being welcomed into an American family by the last of those 4. Later, we met the Israel Colonel who was ordered to build the Barrier Wall between Israel and the Occupied West Bank.

Holding these stories and more, we prayed at the Garden of Gethsemane, then later watched as our guide was videotaped by an Israeli who was threatened by a perspective not his own, a perspective which threatened his denial.  On Saturday night, our group was delighted to dance with arms aloft in the home of a Palestinian family!  It was an evening of good food and music in the hospitable home of the Abu Sarah family in the town of Azeria, the site where Lazarus was raised from the dead… the lively evening certainly resurrected hope in us. During these visits this past week we have driven through checkpoints unhindered and have walked through worker checkpoints- chastened by guards and disturbed by the cage-like atmosphere. Entering Bethlehem, provocative graffiti on the Barrier Wall greeted us and then we dined in a Bedouin-style tent restaurant near the field of the shepherds who were the first to receive news of the nativity story.

Monday morning, the 22nd, we entered the crowded Greek Orthodox Church of the Nativity, where our guides lifted heavy wooden planks to reveal newly discovered 5th century floors there.  Later we walked from the Roman Catholic church, St. Catherine’s, with the monks and others gathered for the processional, to the grotto of Christ’s birth beneath the Church of the Nativity.  Our fearless leader, Tom, opened locked doors so we could view crèches collected from around the world in the Bethlehem Peace Center, an exhibit which Karen had a hand in creating 15 years ago.  Later, we walked along the road though the agricultural village of Wadi Fukin.  The olive trees were ready for havest, their branches heavy with ripe olives. Further into the countryside, our local guide, Muhhaned, led us to one of the natural springs under the watchful eyes of the ever-encroaching Israeli settlement of Bellit.  Its fence, nominally meant to protect, serves to enforce separation and ignorance of the “other”.

Through all of this we have been most blessed by the people we are meeting- Jews, Christians, and Muslims- Israelis and Palestinians.  The former mayor of Bethlehem, Vera Baboun, wove a beautiful tapestry for us all with the vibrant and hopeful threads of her story and insight. Then Muhanned, a Wadi Fukin native, bravely shared the reality of his village’s experience of living and farming beneath the pinching claw of the fence.  Finally, we met two declared brothers from the The Bereaved Parents Circle Families Forum who are bound by the murders of their daughters and their commitment to be neither pro-Palestinian nor pro-Israeli, but rather pro-peace.  No one hears their stories and goes unchanged.   They remind us to hold to the humanity in each other and ourselves.

Through all our days we have been guided by Aziz, Yuval, and Adam whose courage, good humor, and honesty we have witnessed first hand.  Under their tutelage, we hear stories of heartache and pain and love and peace.  As a group, we are sharing our own stories and navigating the treacherous landscape of this conflicted country, while witnessing great beauty and a whirlwind of senses, bodies, souls, narratives, and history.  May we all see each one’s humanity and live into being pro-peace.

of senses, bodies, souls, narratives, and history.  May we all see each one’s humanity and live into being pro-peace 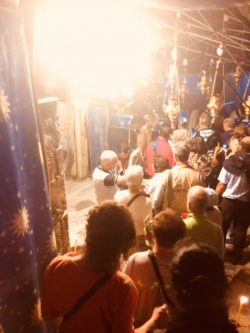 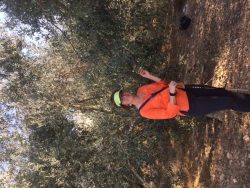