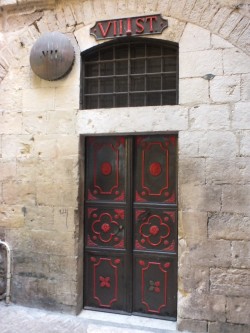 Exploring new cities, countries, and cultures has always been fascinating and fun. I have traveled all around the world, but having the opportunity to travel to a place with such important religious meaning for me has been such a rewarding experience. Learning about another’s cultures religious practices and history is very different from being able to learn about the history of your own.

Today our tour included many historical sites that held deep religious meaning for many people in our group. For me, the experience that spoke to me the most was walking along the city’s Stations of the Cross. As a Catholic, the Stations of the Cross hold a significant meaning to me. It was especially memorable to experience them during the Lenten season. The two most striking stations were six and seven. Station six is where Veronica wipes the face of Jesus. The seventh station is when Jesus falls a second time.

The sixth station is at the base of the stairs (or hill in Jesus’ time) that Jesus would walk up on his journey to his crucifixion at Golgotha. At station six, Jesus is met by Veronica who wipes the face of Jesus. Veronica was moved to help Jesus after seeing him struggle with the heavy burden of the cross so she offered him her veil so he could remove the sweat that had accumulated on his face. It is said that when she wipes the face of Jesus, his face leaves an impression upon the veil she offered him. This station for me is important because of the compassion that Veronica show in her small act. 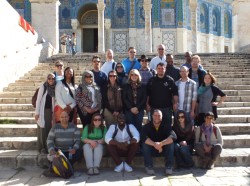 It was as a surreal experience to see where this event was supposed to take place because it gives you a better perspective on the trials and tribulations that Jesus was subjected to while carrying the cross. While standing a station six you can look up the hill towards the top where station seven is located. Looking up the long pathway gives you a small glimpse into how much of a burden it was for Jesus to carry the heavy cross and why upon reaching the top he fell due to the weight of the cross. Station seven marks the moment when Jesus falls a second time. Knowing how his journey was not over yet and seeing how far he has physically walked thus far added to my experience at station seven.

Both of these stations were powerful examples of what Jesus struggled through along his path to Golgotha and also show that even in this moment of despair for humanity, there were still compassionate people such a Veronica and the weeping women of Jerusalem that Jesus meet at station eight.

Overall, I thoroughly enjoyed my experience in the Old City and this post just gives you a small glimpse into all the historical religious places we were exposed to in today’s tour.