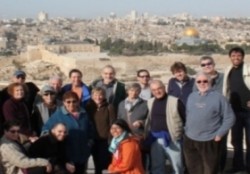 The JRC Israel/Palestine Study Tour traveled to Jerusalem and the West Bank in December.

Brant Rosen is the rabbi of the Jewish Reconstructionist Congregation in Evanston. He’s also a blogger on many issues including the Middle East peace process.

Rosen and about 20 people from his temple just returned from the West Bank and East Jerusalem.  Rabbi Rosen and two of his congregants, Marge Frank and Michael Deheeger, stopped by to tell us about their trip.

Listen to the broadcast