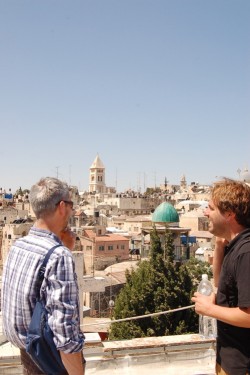 Kevin Conlon and Anthony Shaker, two teachers from Chicago, traveled with MEJDI Tours this summer. Their experiences, including photos and recorded interviews, are shared on their blog. The following is an excerpt from their first day in the region:

As we were driven by taxi into Jerusalem from Tel Aviv’s Ben Gurion airport it was hilly and the highway was winding. There were many clusters of new apartment buildings of white stone, set on rugged hills. When we saw a sign for Ramallah (in the Palestinian Territory of the West Bank) on the outskirts of Jerusalem, all of a sudden walls were visible everywhere, including a view of the Security Wall that is meant to separate the West Bank Palestinian population from Israel. The other walls were mainly barriers between traffic and residential areas, but walls, nonetheless, seemed to be a theme. There were also many security towers visible from the road. We drove through what looked like a toll booth, but there were young Israeli soldiers standing around the booths as the cars drove by, barely slowing down. We were warmly greeted at the National Hotel in East Jerusalem a few blocks from the Old City, where we would stay for our first four nights, and our final night.