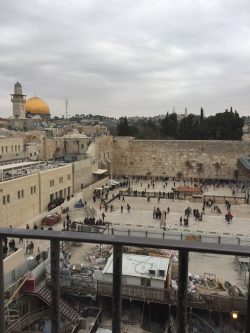 On Sunday we began the day by entering Dung Gate and looking down on the Western Wall as we sent through security to visit the Dome of the Rock and Al Asqa Mosque.  There is only one entrance for non-Muslims.  We met our one guide inside since as a Muslim, he couldn’t come through the entrance we did.  As we waited for entrance Morgie shared Jewish understanding and the various Temple periods and the history of wars.
Once we entered the grounds of the Temple Mount we learned the stories of how this site is important to Islam as one of the three most holy sites-the other two are Medina and Mecca.  The Dome of the Rock is built on the former site of the Temple Mount and is important because it is believed it was from here that Muhammed ascended to Heaven.  The tile work is beautiful and the top tiles have words from the Koran written on them.  Al Aqsa Mosque stands opposite to the Dome of the Rock.  From the grounds you can see the Mount of Olives.  This area between the two is. Mount Moriah.  Because of previous issues and tensions Orthodox Jews are often escorted by the police and security-because they try to get to the Dome to pray.  We saw 2 Israeli men being escorted by 5 security while we were there.
We then entered into the Muslim quarter to see sites along the Via Dolorosa where there has been some which brought us to the Western Wall where we went through security again We had gone through on our way to the Dome of the Rock.  A young boy was celebrating his bar mitzvah but girls cannot celebrate their bat mitzvah’s there.  The Orthodox Jewish community is in charge of this site which is considered a synagogue. 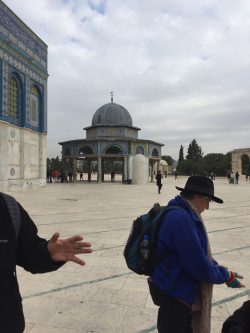 Orthodox Jews are the ones mainly in power in the government currently as well.  The
re is a stark difference that we noticed as we left there and entered the Jewish quarter.  Here there are new buildings.
At one point along the way we walked on the Roman road which had been dug up and fixed in a few spots to allow people to walk along it.  We finished up this section of the day with the last steps of the Via Dolorosa a at the Church of the Holy or as some Palestinian Christians prefer to call it
the Church of the Resurrection.  We saw a typical Jewish burial cave from the time of Jesus and the one that many believe Jesus was buried in.  We also saw the spot where he possibly rose from the dead.  In those days this location would have been outside the city walls. 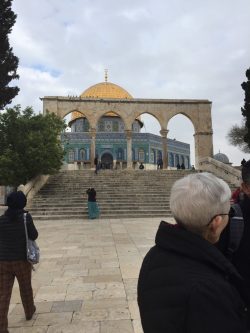 Late afternoon we went to Sabeel and heard Omar Harami speak of his experiences as a Palestinian Christian and about the organization of Sabeel and it’s purpose.  Palestinian Christian’s are a minority of a minority.  He shared lot’s of history with us and talked about the principles by which Sabeel focuses on.  These are inclusivity, justice and non-violence.  He challenged us to not remain silent and to keep our eyes on the little baby of Bethlehem.  He says it is a myth that people is impossible.
Even later after supper we met with Mustafa Abu Sway who spoke again about history and about he Balfour Declaration and that he fears that all the hard work that has been done over the discussion about the future of Palestine and Palestinians may have been hurt badly but he recent pronouncement of the US and yet even so he remains hopeful.