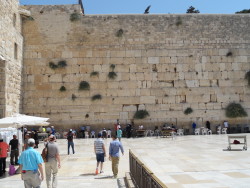 Today we learned about the challenges and issues presented by Israeli settlements in Palestinian communities in East Jerusalem.

We heard from Sania, a resident of the ancient village of Silwan, a Palestinian community. She spoke about the struggle of families who try to maintain their residences as many ideological Israeli settlers move into their neighborhood.

A young representative of ICHAD (Israeli Committee Against Home Demolition), Sharon Casper, took us on an impassioned informational bus tour of many of the new Jerusalem “settlements” and explained the implications of these new communities. 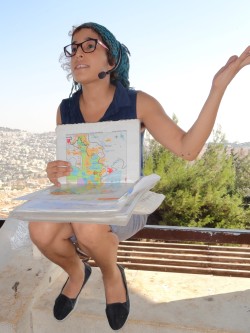 We visited the Western Wall to leave our prayers and then had box lunches in the courtyard of King David’s tomb.

As our day wasn’t quite full enough, later this afternoon at the hotel, we heard a very moving presentation by Salwa Douaibis from the Women’s Centre for Legal Aid and Counseling (WCLAC) and Gerard Horton, a lawyer on the board of Military Court Watch. They are both working to document and bring to public attention the appalling issue of Israeli military arrest and detention of young Palestinian boys (classified as children if they are between the ages of 12 – 17). Salwa works with the families of these traumatized boys and sees the effects on their lives and in their communities. 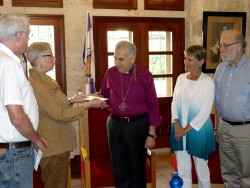 Meeting with the Bishop

This evening we met with Archbishop Suheil Dawani of the Episcopal Diocese of Jerusalem and presented him with a check from the Maundy Thursday offering from St Marks for the outreach work of the Diocese of Jerusalem.  This was followed by a lovely dinner in the garden of St George’s Guest House.