This blog post was brought to you by Amelie R…

Thursday was an incredibly eventful day. We began the day with visiting an Israeli settlement beyond the green line and spoke with a member of the Binyamin Regional Council, a council of Jewish settlements in Samaria. We continued to the Palestinian zone of Area A and B to visit the Yasser Arafat Mausoleum, have lunch at the Arab restaurant Reef and to visit the Mahmoud Darwish Museum. We ended the day with visiting Rawabi, the first planned city built for and by Palestinians. I am going to start off with describing a few observations and then let Connor continue with his.

As we drove out of Jerusalem towards the Binyamin region, our morning started with a discussion about the security wall/ separation barrier. Wording is important when describing the conflict and I am therefore going to simply call it “the wall” in an attempt to remain as neutral as possible. Like Melissa said, in Israel, just about every term can be defined a thousand ways…

The advantage of traveling with Mejdi tours is that they emphasize the opposing narratives as we travel with our two guides, Nathan and Sam. Nathan, who generally presents the Israeli narrative, referred to the undeniable statistical decrease in terrorist attacks since the establishment of the wall as the justification for its existence. Nathan grew up during the time of the second intifada, and the everyday life for Israelis was very different from today. Terrorist attacks were so common that he called public transportation “Russian roulette”.

Sam countered with that Palestinians understand the security argument but consider it hypocrisy so long as the Israeli government continues to build settlements on the Palestinian side of the barricade. Why would the government promote settlements in areas considered hostile and dangerous if they have security concerns? The wall only increases separation between the two communities instead of building bridges and trust. Sam’s words echoed Oded Revivi’s, the mayor of Efrat, who called investing in security measures “and endless game”, as he argued that there will always be extremists who manage to come up with ways to breach security measures. The only way to develop sustainable peace is through promoting reconciliation, not further separation.

The wall is a great example of an issue that might seem straightforward to outsiders but that is more complex than it appears. If anything, this course teaches us that there is no simple answer. As Professor Waxman said in our first class, the tendency to simplify the conflict is one of the greatest obstacles to conflict resolution.

When we arrived to the winery in the Binyamin region, Miri Maoz Ovadia from the Regional Council greeted us. She spoke about their ideology and goals, and also answered questions of ours, some more comprehensively than others. It was interesting listening to the perspective of a settler who wants to annex the “disputed territories” and thinks that they should be integrated into the Israeli society. Miri avoided the question of what to do with the Palestinian population; it sounded as if she wanted a “civil rights system” that would apply to all but she didn’t specifically say that Palestinians should be citizens of Israel. Incorporating the occupied territories would change the country demographically, which would mean the end of Israel as a Jewish and democratic state. Miri didn’t address the question posed by Noam of the issue of legal rights. Her evasive response led me to believe that she was satisfied with the current situation – where the Palestinians live under martial law and are unable to expand their communities, while Israeli settlers live under civil law and continue to expand the settlements whilst receiving financial support from the Israeli government. Many students expressed frustration and a sense of hopelessness after her contradictive answers.

After the meeting, we drove towards Ramallah. Sam spoke about the current situation and how Palestinians live their lives under military law. The Israeli Civil Administration of the West Bank, a military entity that deals with civil matters, administers the occupied territory. The entity issue travel permits and building permits for Palestinian privately owned land. The vast majority of these requests get denied, which is a factor contributing to underdevelopment.

In Ramallah, we visited the tomb of Yasser Arafat. Arafat, who died under controversial circumstances in 2004, was the leader of the Palestinian Liberation Organization (PLO) before becoming the President of the Palestinian Authority (PA). Nathan described Arafat as the David Ben Gurion or the Mahatma Gandhi of the Palestinians, and as the Osama Bin Laden of the Israelis. Sam added that who is a terrorist depend on the observer. He used the example of Yitzhak Rabin, who gave the order to break the bones of Gaza children throwing stones, and later on received the Nobel Peace Prize.

The elite unit of the presidential guard of the Palestinian Authority’s force was stationed to protect the mausoleum. The symbolized architecture and design of the site was evident; the olive tree behind the tomb symbolized peace, the five hundred blocks around symbolized the five hundred Palestinian villages that were destroyed after the establishment of the State of Israel, and the building had huge glass windows to symbolize the simplicity and transparency that characterized Arafat’s leadership. The mausoleum was the perfect example of how the Palestinian narrative differs from the Israeli one. In Israel, Yasser Arafat was widely regarded for his corrupt and undemocratic ways, and for being a murderer and a terrorist.

All in all, Thursday was a day that highlighted how the two narratives of Israelis and Palestinians largely contradict each other, and some of the contemporary obstacles to ending the conflict. 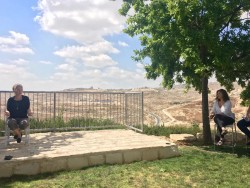 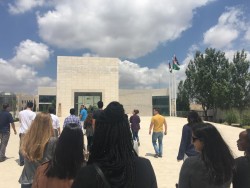 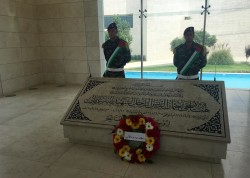 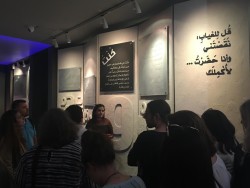 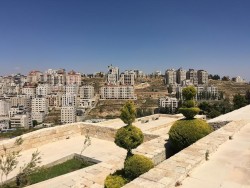 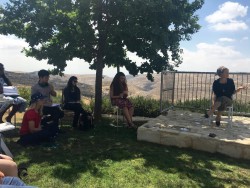